In the frigid waters off the coast of southeast Alaska, Coast Guard Petty Officer Josh Stewart volunteers to attempt a daring underwater rescue of a passenger from a downed seaplane. This incident becomes the catalyst that launches his Coast Guard career as a Rescue Swimmer.

After many other life threatening rescues Josh finds himself and the crew of a Coast Guard 44-footer facing their ultimate test of courage and strength in a powerful storm off the Pacific Coast while enroute to save the victims of a shipwreck. Speeding towards the injured and frightened victims, the rescue boat is buffeted by torrential rain and a powerful wind that forms towering waves and a raging sea.

But the fierce storm is only one of the obstacles Josh faces in trying to rescue the stranded survivors who struggle against the power of the ravaging storm in their own isolated and precarious location huddled on a slippery rock precipice. As he attempts to rescue a trapped mother and her son, one final challenge forces him into a perilous life and death situation. It will take all of his courage, ingenuity and physical stamina to survive this struggle to stay alive in the sea he loves. 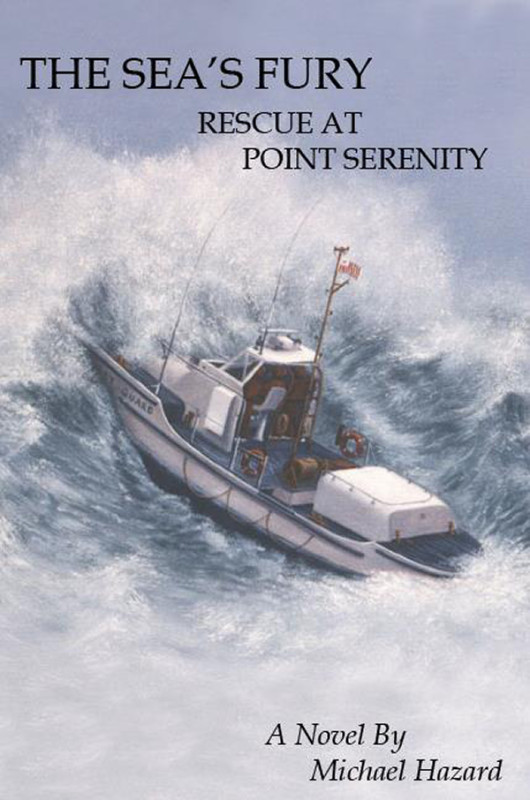 When they were finally within earshot of the pilot, who had the cockpit door open and was standing on the left pontoon, Josh yelled, “Is everybody okay on board? Do you have life jackets?”

“So far so good,” came the barely audible reply from the stranded plane. “We’re wearing life vests and there are enough flotation cushions for everybody on board.”

“Roger that. Why is your starboard pontoon lower in the water than the port side?”

The pilot’s answer was not what either Josh or Skip wanted to hear. “When we landed, the starboard pontoon took the top of a wave really hard as we were setting down and it split the top seam of the pontoon open and it’s filling with water. It looks like the strut is bent as well, and I’m not sure how much longer it’s going to last with the added weight of the water in the pontoon.”

“How many people are onboard?”

“Three. One woman and two men.”

Skip moved the Boston Whaler in as close as possible without taking the chance of the rising and falling wing slamming down on the boat and capsizing it.

“Okay,” Josh yelled to the stranded pilot, trying to make himself heard over the increasing noise of the wind and breaking waves, “we need to get you and your passengers onto the left side of the plane. Bring the lady out on the pontoon with you and position the other guy in the pilot’s seat. We’re going to line up just outside your wingtip. When the next swell comes in, we’ll synchronize our motion with yours. When we’re in sync together and we hit the bottom of the swell, there will be a two to three second pause when we’re on the same level. Once we hit that position, we’ll come in close, pick up the female passenger, then back out quickly. We need you to stay with the plane until we’re ready to pick up the other male passenger. As soon as we get the lady, have the guy step down to the pontoon with you and we’ll pick you up together. Any questions?”

“No, I got it,” the pilot replied. The plane suddenly listed drastically to starboard and the right wing dropped closer to the water’s surface. “Let’s just get this over with!”